The Adirondacks are home to a variety of wildlife, from moose to white-tailed deer and a colorful array of boreal birds. Learn about the extraordinary animals of Upstate NY below.

Old-growth and second-generation forests in the Adirondacks are home to a multitude of wildlife and birds. There are over 50 species of mammals that live in the Mountains of the Adirondacks - from tiny moles to massive Moose. White-tailed deer, black bears, coyotes, squirrels, and chipmunks are quite common and can be seen in abundance on any given day.

Whenever you encounter wildlife in the Adirondacks, please remember to respect their space, and never feed a wild animal. Providing a tasty treat might seem helpful, but teaching wildlife to rely on humans for food can lead to dangerous encounters down the line or an inability to fend for themselves. Unlike our beloved pets, these animals have natural instincts that make them unpredictable. Enjoy observing from afar, but never approach, no matter how cute they look!

Black bears are an iconic Adirondack animal, with more than 50% of the state's bear population residing within the region. They are often spotted by hikers and campers, both in the backcountry and at public campgrounds. While they are a symbol of wilderness, they can also easily become dependent on people, so it is important to never intentionally or accidentally feed bears – for their protection and yours! When camping, food should be kept in secure containers away from where you sleep or cook. In the High Peaks region, backpackers are required to bring bear-proof canisters to store their food, toiletries, and garbage. At 170 to 300 pounds, it comes as no surprise that bears will eat just about anything, including plants, berries, fruit, corn, nuts, seeds, insects, carrion, and, of course, honey. Curious creatures, they often come close to human-inhabited areas – especially when there is garbage to rummage through! While bears are intimidating and can be dangerous, they are not generally aggressive. They are intelligent, and will rarely pick a fight unless food or their cubs are involved.

Meet Luvey and Ahote, the two friendly black bears at the Adirondack Wildlife Refuge in Wilmington. 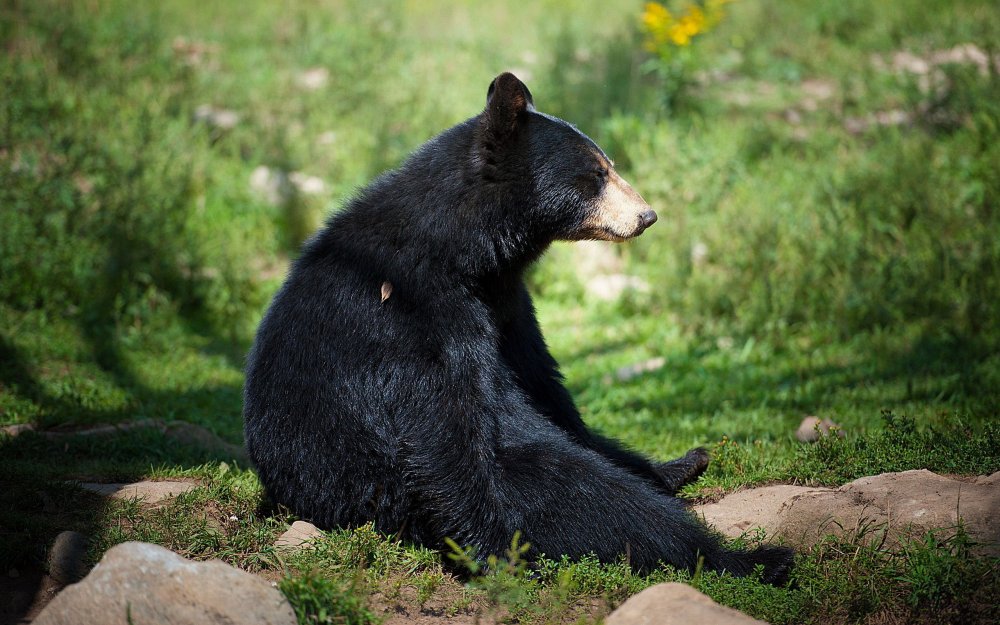 While White-tailed Deer are commonly spotted throughout the Adirondacks bounding through fields, ambling through forests, or skittishly crossing roads, Moose are a rare sight. Surprisingly quiet in the woods, they often go undetected despite their massive size. When they are spotted, it is often near plant-dense bodies of water where they enjoy grazing on aquatic plants. Considering bull moose can grow to 1,200 pounds, it is amazing that their diet consists largely of leaves, twigs, bark, and tree buds. While bear and coyotes will occasionally attempt to take down a calf, adult moose have no known predators in the Adirondacks. Standing six feet tall with antlers that can grow up to five feet wide, Moose are not an animal you want to face off with, and they can become aggressive if they feel you are a threat.

Places to See a Moose 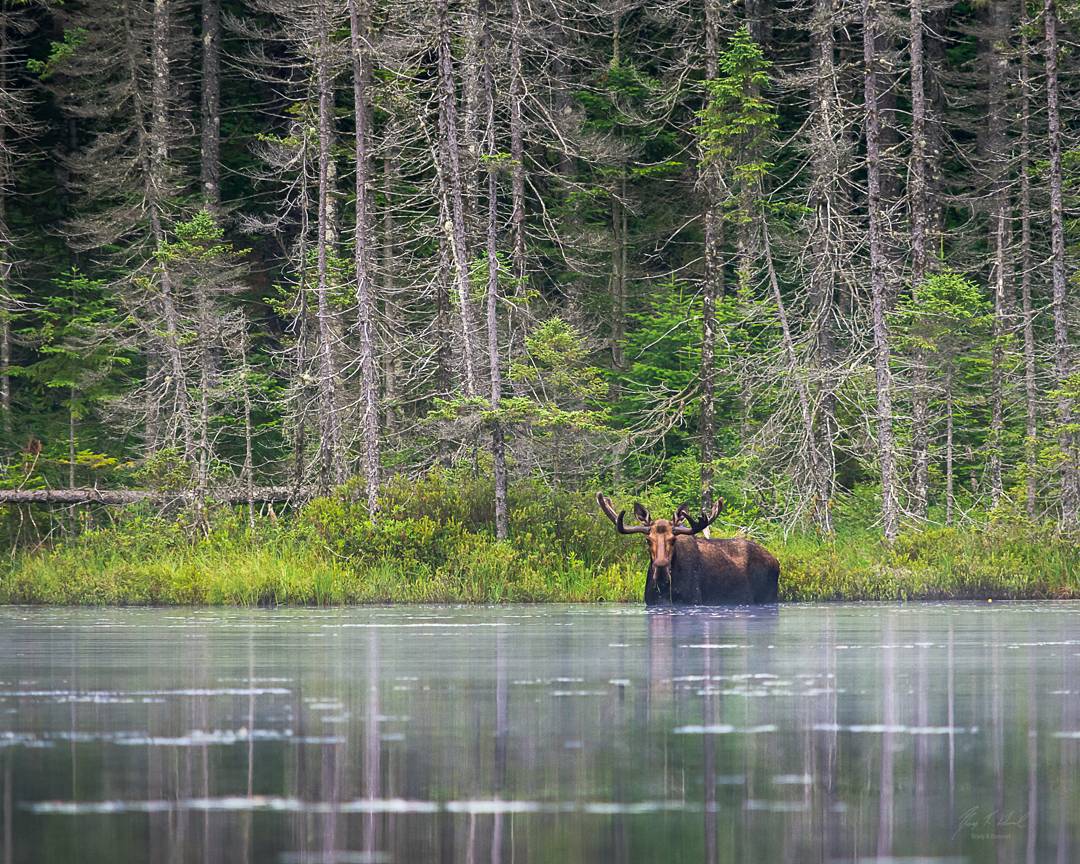 Both red and grey fox can be found in the Adirondacks. Distinguishable mainly by their fur, red fox sport brilliant coats of ginger orange fur with white and black markings on their faces, tails, and paws. Grey fox tend to remain hidden deeper in the forest, and have short black and grey speckled coats, black-tipped tails, and some red and white markings on their stomachs and necks. Their diets are essentially the same, consisting largely of rodents, small mammals, birds, reptiles, amphibians, and eggs, while acorns, apples, and corn satisfy their sweet tooth. Though fox are mainly nocturnal, they can be seen at any time of day. 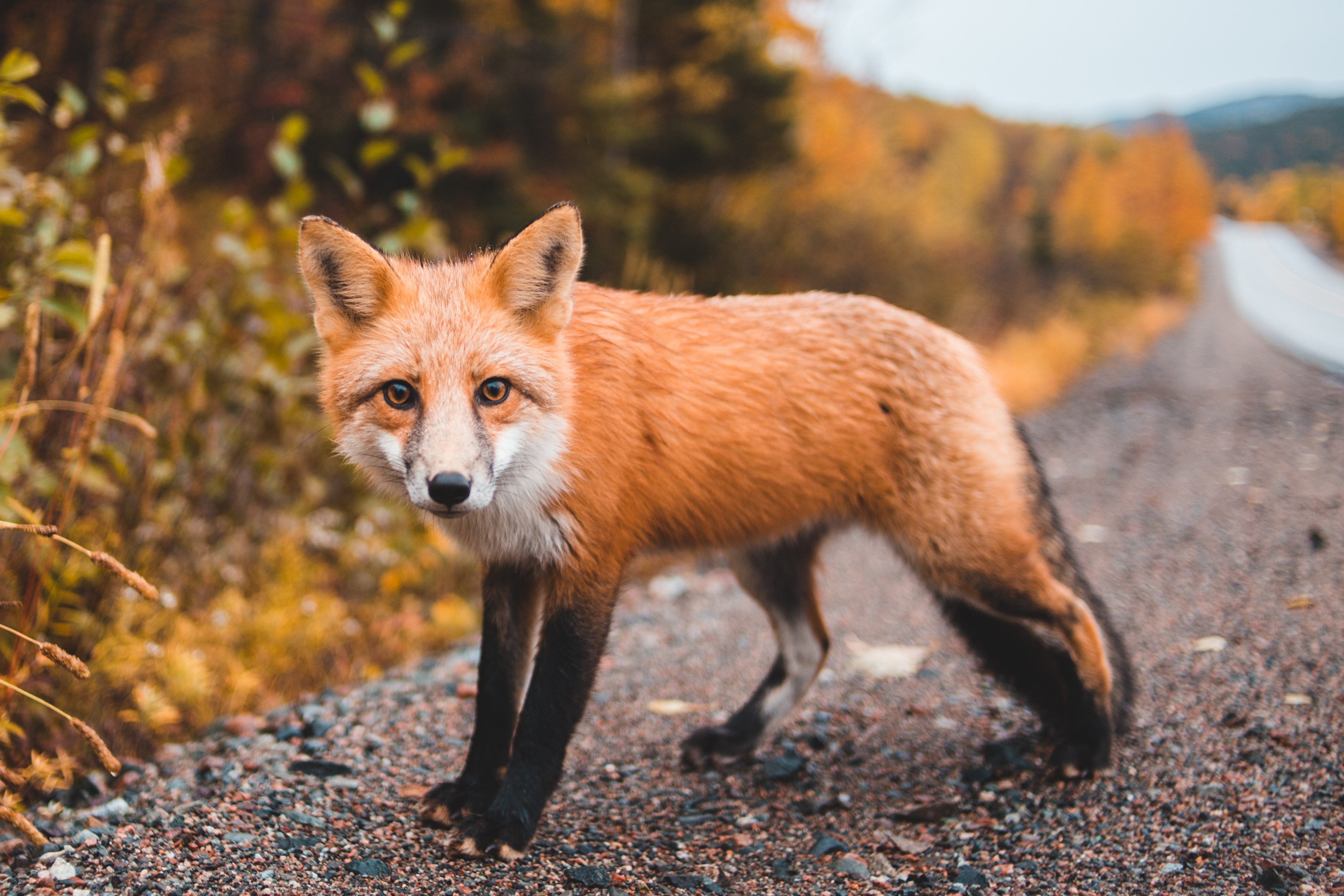 Approximately twice the size of a domestic house cat, bobcats have short, dense fur that varies from reddish in the summer to grey in the winter. Long hair on their cheeks, short black tufts on their ears, and a short, bobbed tail lend a resemblance to Canadian lynx, though they rarely grow as large. They often make their homes under the protection of rocky ledges or rock piles, but will make do with a hollow log or dense, secluded bog. They eat primarily deer and rabbits, and will snack on birds and rodents when the opportunity arises. Solitary animals that are active both day and night, bobcats are most often spotted hiding up a tree. 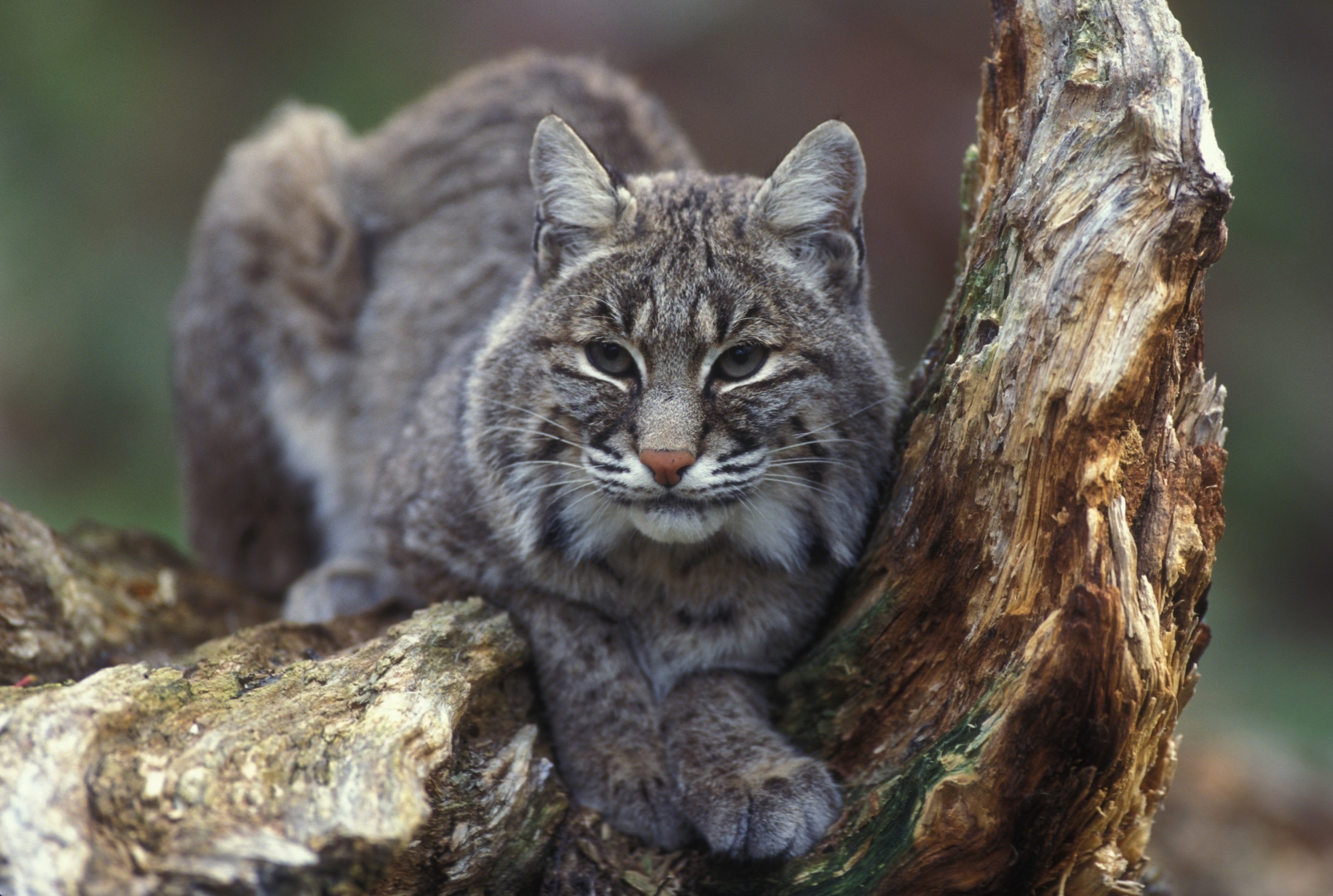 The Adirondacks may be known for its mountains, but it has just as many lakes, ponds, rivers, streams, and wetlands as it does scenic summits, and in those water-filled paradises live some of the region's most interesting creatures! From painted turtles sunbathing on rocks to the monstrous snappers found around swamps and ponds, the Adirondacks is home to a wide variety of shell-clad friends. Newts, salamanders, frogs, and toads are found nearly everywhere you look, especially after a good rain. If you see the grasses shudder or hear the fallen leaves shake, you may have disturbed a sunbathing snake. And, as the local fishermen know, fish can be found almost anywhere you cast a line.

Fishing in the Adirondacks 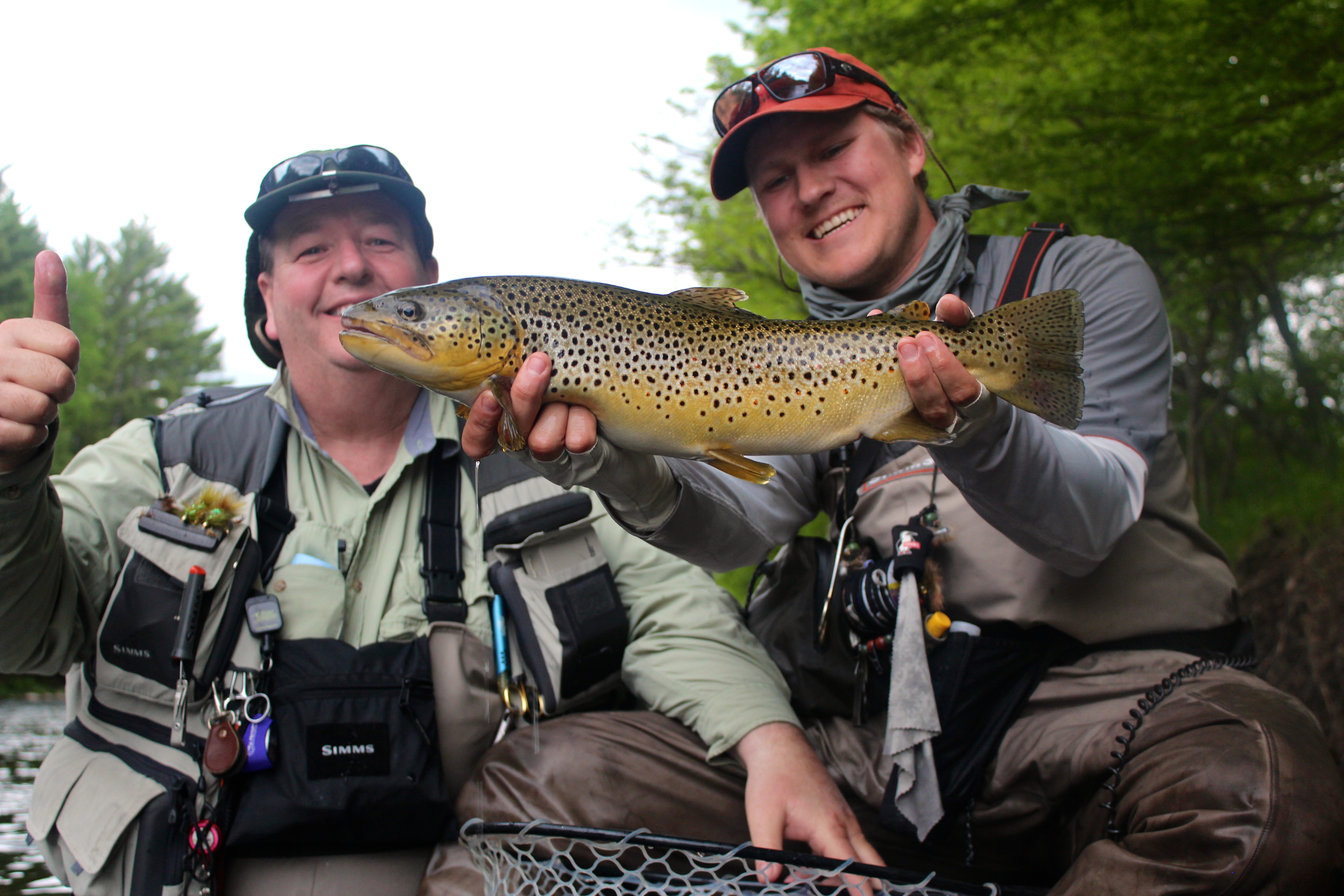 Gentle creatures, but dangerous when provoked, porcupines are easy to identify thanks to their spikey exteriors. A large rodent, they actually have a layer of soft hair under all those quills. Enthusiastic herbivores, a porcupine's favorite pastime is eating, and they enjoy fruit, leaves, and tree buds that they reach by gracefully climbing trees. Contrary to popular belief, porcupines cannot shoot their quills. Rather, the barbed spines detach easily when they come in contact with curious predators.

These small masked bandits can be found throughout the Adirondacks, especially where there is tasty trash for them to pick through! A scavenging animal, they are frequently sighted at campgrounds, where they will gladly make any unsecured food or garbage their decadent feast. When they're not relying on forgetful humans, they eat fruit, nuts, berries, insects, and smaller mammals. Plump, round, and fluffy with human-like hands and feet, raccoons are a joy to observe. However, they tend to carry diseases that can be dangerous to humans and pets, so, as with any wild animal, give them their space and never feed or approach them.

The beaver is New York State's official mammal, and they leave their signature marks all over the Adirondacks. From beaver dams along rivers and streams to big stick and mud huts and gnawed off trees, it's hard to miss the tell-tale signs of a beaver. Fascinating creatures, they have giant front teeth that allow them to chew through even the hardest of woods, and a wide, flat tail that they slap against the surface of the water to warn others of approaching danger. Webbed hind feet make them excellent swimmers, and they are one of few mammals that can digest woody plant material. Beavers also mate for life and live in complex social colonies. If you see a creature that resembles a beaver but has a long, rat-like tail, you have spotted a Muskrat!

There are several species of weasel found throughout the Adirondacks, frequently in and around waterways. The playful otter is perhaps the most popular, charming people with their silly antics and adorable faces. The more elusive American Marten has a small face and a big, bushy tail. With retractable cat-like claws and large paws, they can climb trees as easily as they float across snow. Curious yet shy, you never know when a marten might be watching you! Slightly larger with dark brown and black fur, Fishers have long been hunted for their soft, glossy fur. Undiscerning in their choice of prey, they are fierce hunters and fighters themselves. 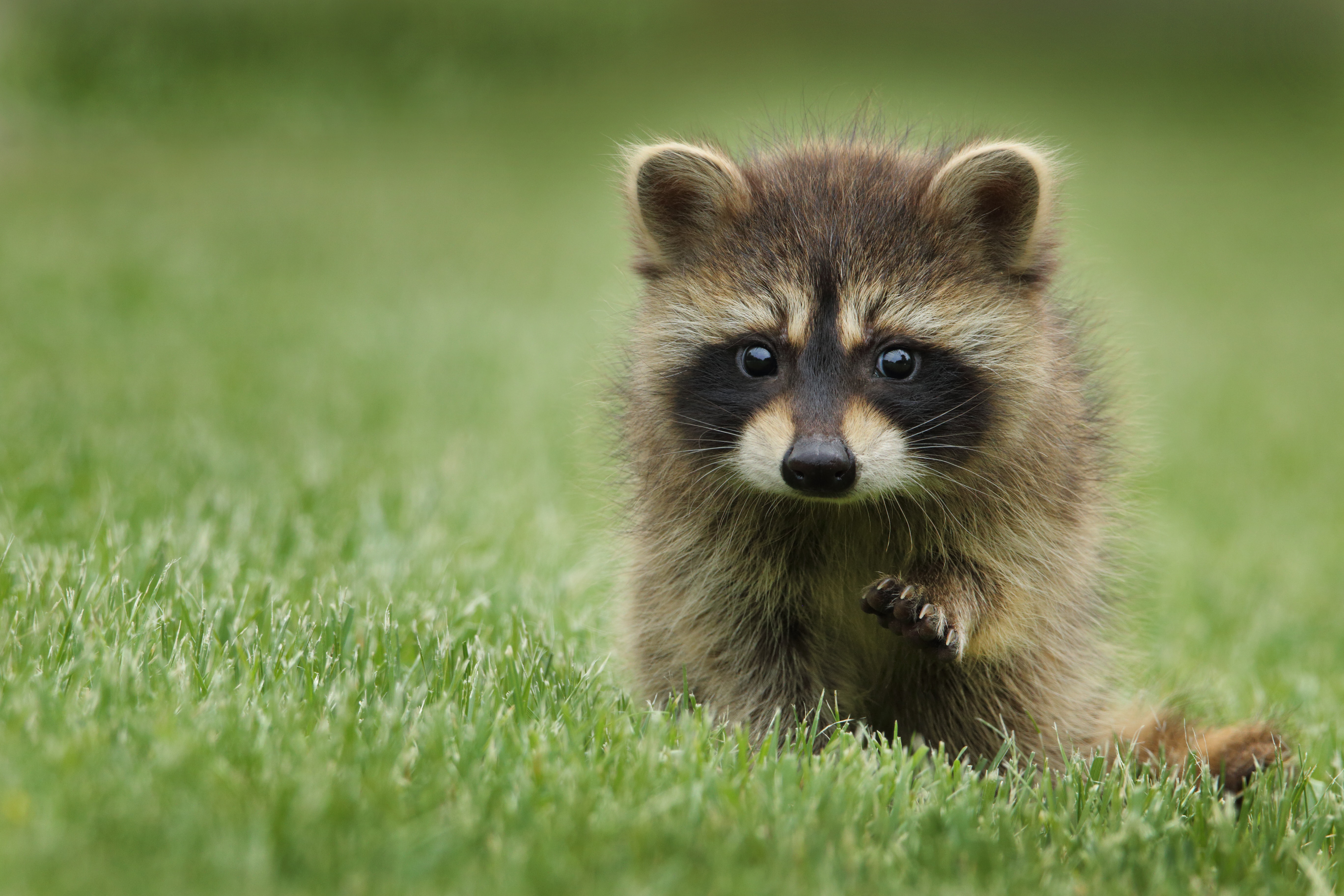 The Adirondack Region is considered a quiet, peaceful place, but you will rarely find yourself without a bird to listen to. Early in the morning or as dusk settles into the mountains, songbirds fill the air with their melodious calls. Wherever you go, Bluebirds, Chick-a-dees, sparrows, Robins, and finches flit around from tree to tree. As you walk through the forest, Red-headed Woodpeckers can often be heard drilling a tree in search of their next meal. A rare bird found in the highest of forests, Bicknell's Thrush are frequently sought out by birding enthusiasts.

From the small American Kestrel to the magnificent Bald Eagle, the Adirondacks are home to a wide variety of raptors. Both Red-tailed and Red-shouldered Hawks are at home within the region, the former preferring open fields for easy hunting and the latter sticking to hardwood forests and deciduous swamps. As you hike below rocky cliffs keep an eye out for the elusive Peregrine Falcon, which has made a remarkable comeback thanks to conservation efforts. Spend a day on the boat and you might be fortunate enough to spot an Osprey, a large fish-eating bird that likes to hunt over the region's expansive lakes. Bald Eagle sightings are also common along lakeshores, and the brilliant flash of white as the sun glints off their heads never ceases to amaze.

Have you ever been spooked by the hoot of an owl? Spend a summer night camping or gathered around a fire in the Adirondacks and there is a good chance you will hear their haunting call. Home to several owl species, some of the most commonly spotted (or heard) include the Great Horned Owl and Barred Owl. Both prefer densely forested areas where they can easily prey on small mammals, snakes, and frogs, and their nocturnal nature means they are most active at night.

What will you spot as you travel along Adirondack waterways? Great Blue Heron are a frequent sight. These tall, slender birds perch in tall grasses, ready to strike on unsuspecting fish below the water's surface. Canada Geese are often found on grassy lawns near ponds and lakes, and ducks make themselves right at home on all bodies of water. The most coveted of Adirondack waterfowl to glimpse in the wild, however, is the Common Loon. The black and white speckled bird with unmistakable dark red eyes is sometimes referred to as the "spirit of the northern waters." They are a symbol of Adirondack wilderness, and their unique call echoes across still waters like an anthem.

Not all birds are found in the air or on water. Some can be found picking their way through the forest floor. American Woodcock, an unusual bird with a beak seemingly too long for its body, can be found nestled into thick forest floors. If you go on enough hikes in the Adirondacks, you are bound to run into a Ruffed Grouse at some point. While their excellent camouflage may hide them from sight, their loud, drumming wings give them away whenever danger comes near. Wild Turkey are also a common, and can be seen grazing in fields and along roadways.

Download our ultimate guide to bird species and birding in the Adirondacks.

Birding in the Adirondacks 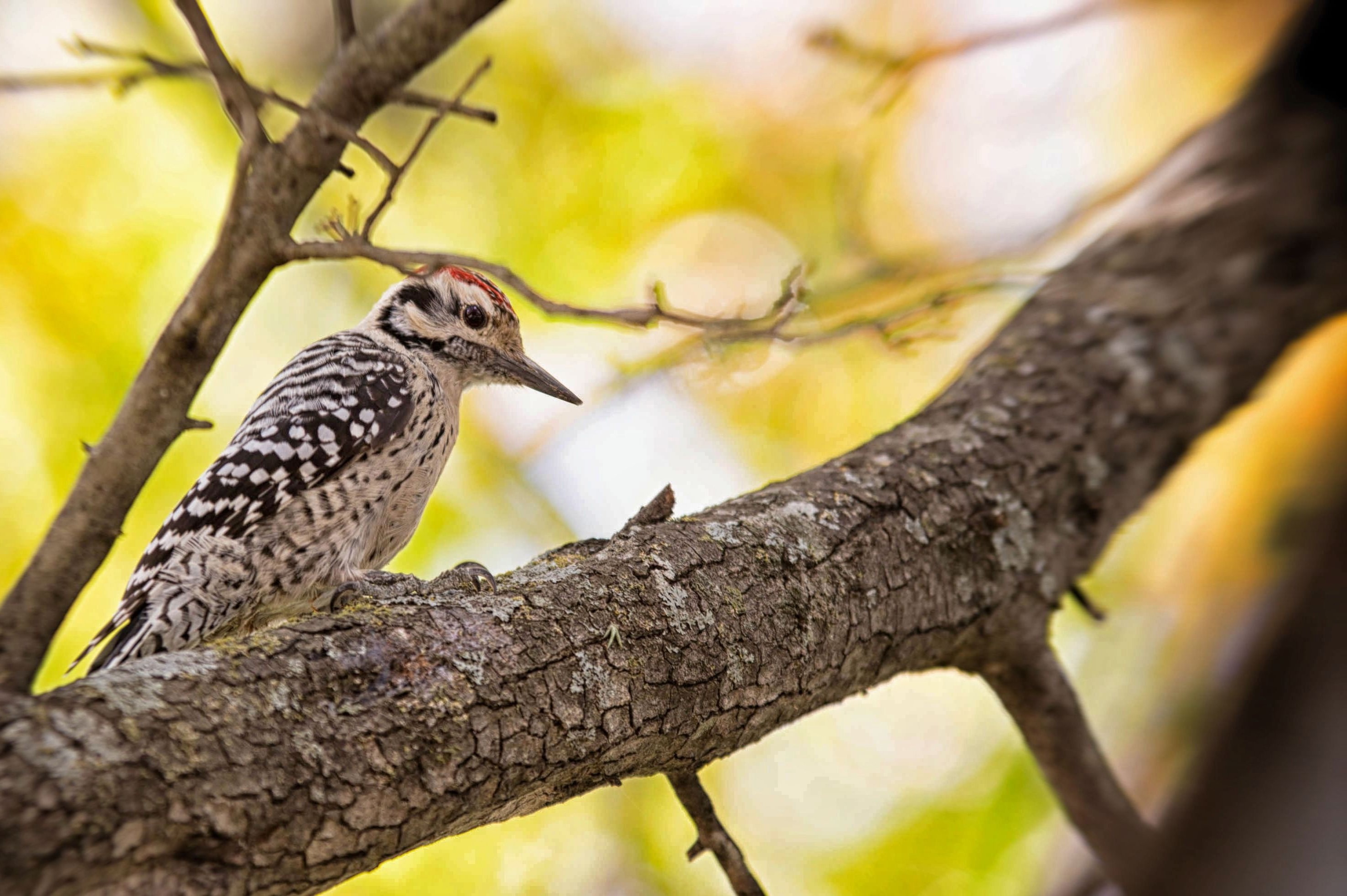