Fishing, whether with a lure or fly, is a passion in the Adirondacks. Bass, trout, walleyes, land-locked salmon, northern pike, and muskies are only part of the fishing roster here. The Ausable River is legendary among fly fishermen, and Lake George and Lake Champlain, among trophy fishermen.

With over 3,000 freshwater lakes, rivers, streams, and ponds, the Adirondack regions are teeming with aquatic life. Surveys by the New York State Department of Environmental Conservation (DEC) continue to indicate that warm-water fish are very popular with anglers. The Adirondacks and surrounding areas are fortunate to have fantastic freshwater fishing for largemouth bass, smallmouth bass, perch, walleye, and other popular warm-water species, often closer to home than people might think. Download a FREE Adirondack Fishing Guide to help find all the best places to catch your prize fish.

Adirondack waters boast trophy walleye and northern pike, but anglers should be aware that mercury contamination is a problem. Mercury concentrations tend to be high in older, larger warm-water fishes throughout the Adirondacks and the New York Department of Health has issued guidelines on consuming such fish. Consider what you choose to eat, and remember that releasing those large fish means even better fishing for your next outing.

The DEC provides a wealth of information on freshwater fishing tips, regulations and a listing of warm-water fishing locations in each DEC region. Find out more about the topics below, as well as many more, by visiting their site through the link below.

The DEC offers New York Fishing hotlines that provide information to anglers about fishing locations, fishing conditions, and types of fish found in the waters of New York State. These hotlines are updated every week and are a great way to keep up to date about where to catch the best fish.

It is important to understand current fishing regulations before you set off on your next angling trip. Guides are available both as PDF downloads as well as on the DEC site. Many of the Adirondack lakes, rivers, and ponds have strict regulations regarding live baitfish, invasive species and catch and release policies. Make sure that you know what types of fish and styles of fishing are permitted in each body of water you plan on fishing. 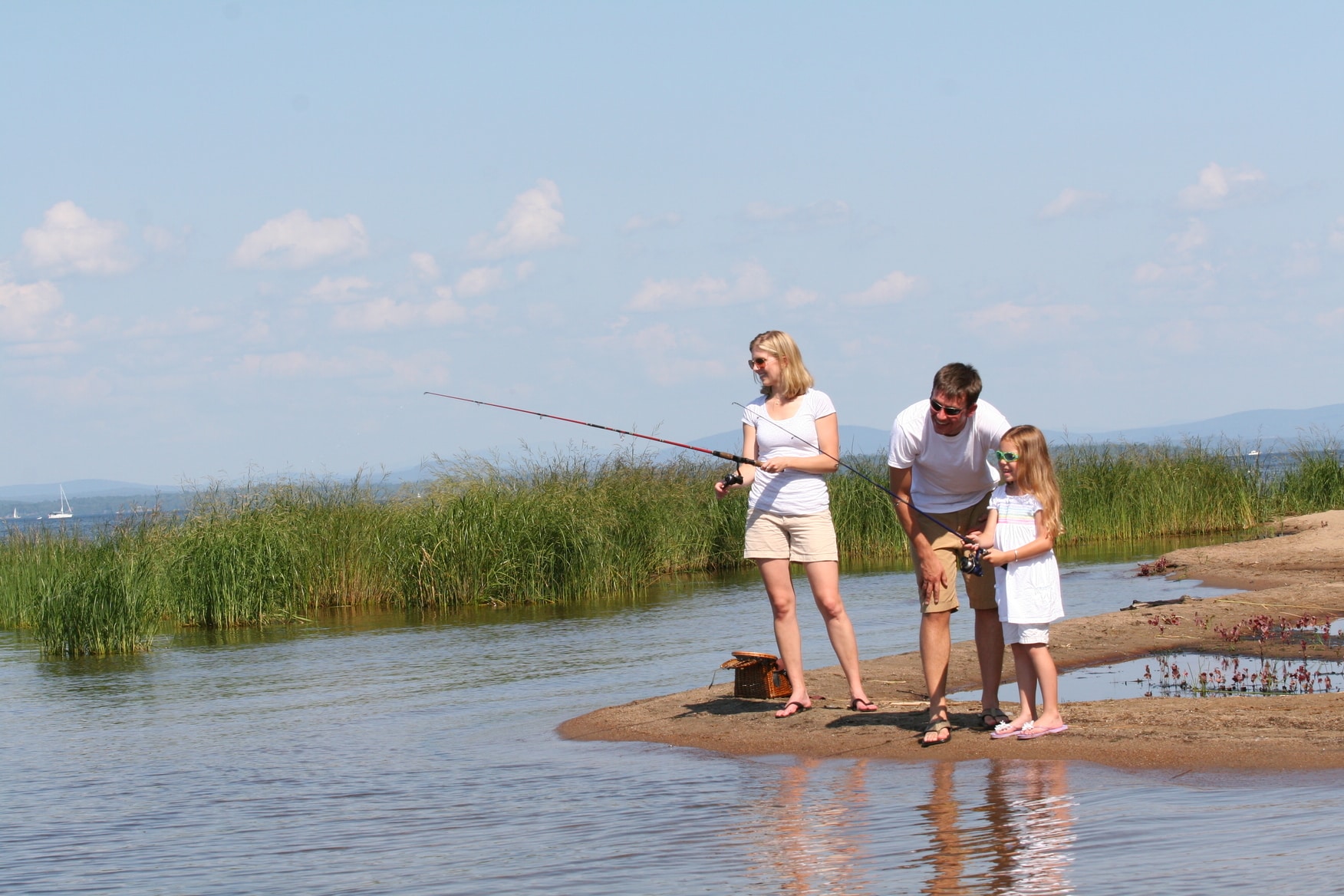 Spring in the Adirondacks means one thing for fishermen – the long-awaited beginning of Trout Season. Opening day is April 1, but there's usually an inch or two of ice still covering most of the Adirondacks' top fishing spots – at least in the mountains. Our advice is to begin fishing for upstate New York trout in late April or early May, giving a chance for the ice to melt.

Fish for Rainbow, Brook, Brown and Lake Trout on thousands of miles of waterways across the Adirondack Region, from the West Branch of the Ausable River's riffles and rapids to the Chateauguay River's eddies and falls. Head into the wilderness to fish for trout on a small, remote pond in the Moose River Plains, or compete in an angling event like the Ausable Two-Fly Challenge in the village of Wilmington, the fly fishing capital of the Adirondacks, and try to land a trophy catch.

Our Recommendations for the Best Reclaimed Trout Waters in the Adirondacks

The walleye, the largest member of the perch family, is one of New York's most highly sought after and valued sportfish. It has the capacity to reach considerable size, presents a challenging fishing experience to anglers, and offers exceptional quality at the table. Historically, walleyes in New York likely inhabited waters only in the Great Lakes, St. Lawrence River, and Allegheny River watersheds. Today, primarily due to stocking and other DEC management efforts, walleyes are found in over 140 waters from all of the major watersheds of the State. Each year DEC hatcheries produce approximately 200 million fry, 350,000 spring fingerlings, and 180,000 fall fingerlings to support its walleye management and restoration efforts. Some of the most productive walleye fisheries in the state can be found in and around the Adirondacks, including Tupper Lake, Union Falls Flow, Saratoga Lake, Great Sacandaga Lake, and Delta Lake.

New York has developed a well-deserved reputation as a priority destination for trophy pike anglers. High-quality pike waters include many of the larger Adirondack lakes such as Tupper Lake, Schroon Lake, Lake George, the Saranac Lake Chain, Cranberry Lake, First, Second, Third and Fourth Lakes of the Fulton Chain, Long Lake, Upper Chateaugay and the St. Regis Chain of Lakes. Great Sacandaga Lake regularly provides a trophy pike fishery for anglers with a number of 20 lb+ fish having been caught in recent years.

Chain pickerel are also very popular with a dedicated group of anglers seeking these toothy predators that typically inhabit shallow, weedy waters. While found in many waterways in the Adirondacks, hotspots include Lake George, Brant Lake, Saratoga Lake, Lake Champlain, and the Black River.

The DEC has been raising and stocking tiger muskellunge, a sterile, yet fast-growing cross between northern pike and muskellunge, since 1967. Approximately 75,000 9 inch long tiger muskies are annually raised at the DEC South Otselic Hatchery. In the Adirondack region, First, Second, Third and Fourth Lakes of the Fulton Chain, Horseshoe Lake, Lake Durant, and Lincoln Pond all have good tiger muskellunge fishing.

Our List of the Best Places to Fish in the Adirondacks

With more than 3,000 lakes and ponds and 1,500 miles of rivers - the Adirondacks offer several of the best places to fish in New York State.

The Adirondack Seaway is home to hundreds of rivers, lakes, and streams teeming with a variety of species. From downrigging for Muskies around Massena to fishing for Northern Pike or jigging for black carpies, find your own "honey hole" and cast a line for Brook Trout, Bass, and Carp. Ranked one of the top 100 Bass Fishing Spots in the Nation, the St. Lawrence River hosts multiple fishing tournaments throughout the summer and fall.

Lake Pacid Fishing includes more than just the Lake. Fly fishing the West Branch of the Ausable River near Lake Placid is a tradition among sportsmen, and the river's fast-moving water creates ideal conditions for anglers from early spring through fall. If you're looking for spin casting opportunities, head out on one of the region's countless lakes and ponds and fish for Bass, Perch, Bullhead, Lake Trout, Atlantic Land-Locked Salmon or Smelt.

The Adirondack Coast offers some of the best bass, ice, and fly-fishing on the East Coast. Home to 80 species of warm and coldwater fish, cast your line throughout the year for Large and Smallmouth Bass, Walleye, Lake Trout, Brown Trout, Land-Locked Salmon and more. Don't miss the Adirondack Coast's thrilling lineup of bass fishing tournaments this summer on Lake Champlain. 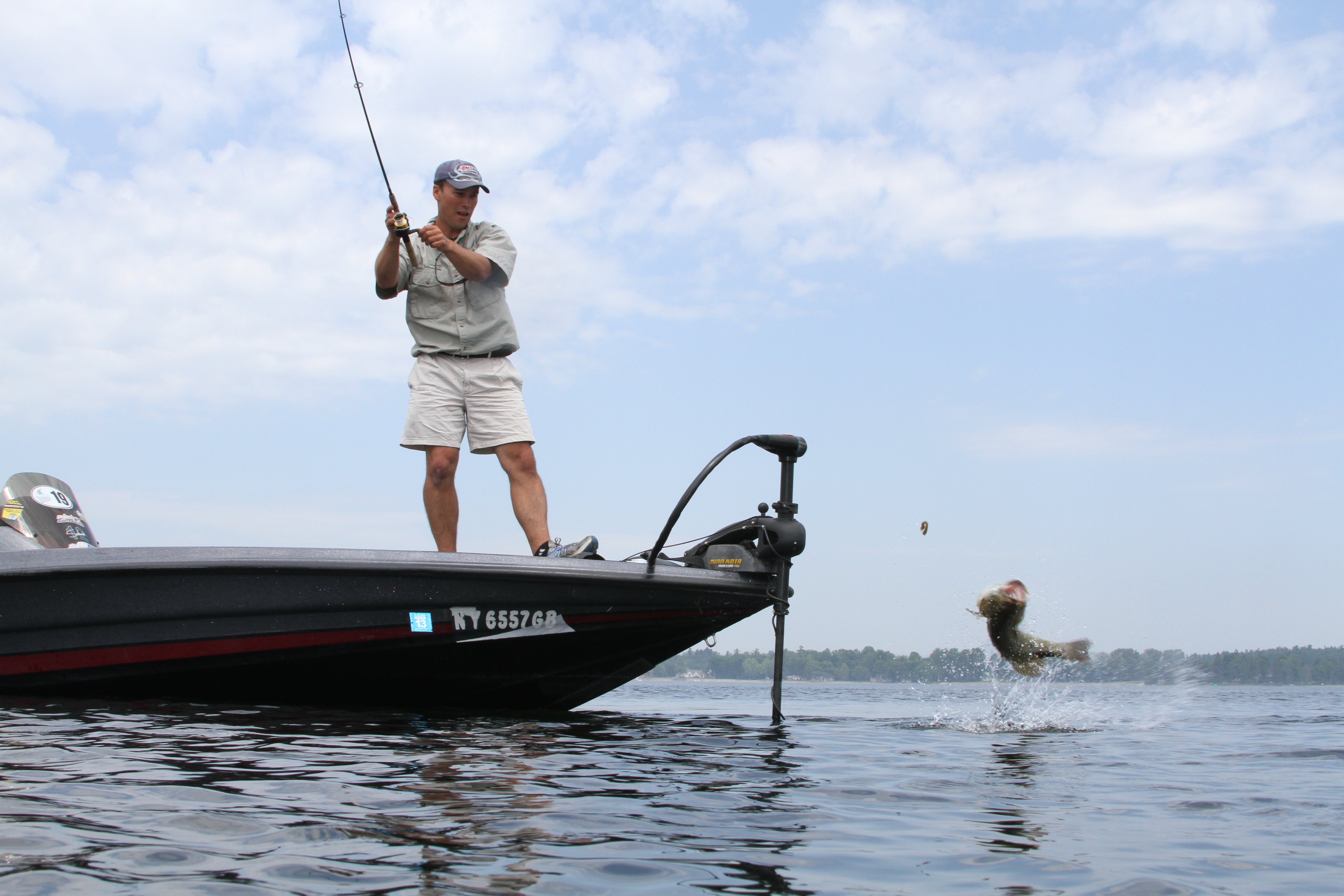 More Information For Your Fishing Trip to the Adirondacks