The Adirondack Tug Hill Region is home to the Lewis County Trail System, offering approximately 500 miles of off-road ATV tracks and trails, including reforestation areas and private landowners’ trails. OHV riders can experience three distinct geographical areas, the Adirondack Park, Black River Valley, and the Tug Hill Plateau. From riding the foothills of the Adirondack Mountains to the lush green river valley, and the impressive plateau that offers incredible views in all directions, the Lewis County trail system offers a unique riding experience for all ATV and OHV riders.

For new ATV riders or new-to-the-area riders, get a proper introduction to Lewis County’s system at Lee Gulf. Known for its stunning scenery and views of towering wind turbines, it’s a great intro to the area. For a spectacular first ride, start in Barnes Corners and travel down through scenic countryside to the gulf. 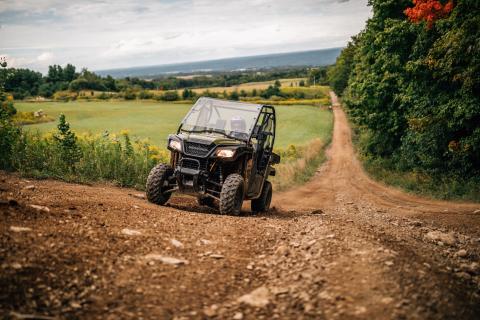 A permit is required to ride the Lewis County Trails on ATVs, and three-day or seasonal permits are available. During the first full weekend of August, riders may ride the trails without a permit from Friday through Sunday. Permits are issued per machine, not per person, and include a decal that must be visible on the OHV. Permit fees go into a recreational trail fund and are used exclusively for the establishment, enforcement, maintenance, and operation of the trail system for the county.

One of the most unique features of ATV riding on tracks and trails around Lewis County is the number of trailside restaurants and fueling stations open in remote corners of the county.

ATV and Equipment Rentals & What to Bring/Wear

The trail system opens at the beginning of April, conditions permitting, and closes the Tuesday after Columbus Day in October. Trails may be closed due to conditions, landowner requests, and weather.

Local OHV clubs put on their own events every year, but one of the biggest events is the SNIRT Run in April, a large fundraising poker run that attracts thousands of ATVers, and September’s Ride for Ryan, which raises money for the Ryan J. LaBarge Memorial Scholarship Fund. Named for an 18-year-old Copenhagen teenager that was killed in a farming accident, the scholarship is presented annually to a Copenhagen Central School senior who is college-bound or going on to attend a trade school. The Tug Hill Buck Run is the last big ride of the season before hunting season starts. The ATV community turns up for one last ride, and good music, food, and cash prizes.