What is the Adirondack Park?

Created in eastern upstate New York in 1892 as one of the first Forever Wild Forest Preserves in the nation, the Adirondack Park is a unique wilderness area and National Historic Landmark. At 6 million acres, it is the largest publicly protected area in the contiguous United States. The state of New York owns approximately 2.6 million acres, while the remaining 3.4 million acres are devoted to forestry, agriculture and open space recreation. The Adirondack Park is not a National Park - there's no fee to enter and the park doesn't close at night, nor is it a state park, a common misconception. It's also the largest National Historic Landmark in the United States, covering an area larger than Yellowstone, Yosemite, Grand Canyon, Glacier, and the Great Smokies National Parks combined.

When the Adirondack Park was created in 1892 by the State of New York - this diverse mountain landscape was a wild place. Full of pristine waterways, boreal forests, and the towering mountains. It was land ripe for cultivation or conservation, and it was already on the brink of wide-spread deforestation.

Within the Adirondack Region is the largest publicly protected area in the contiguous United States. It is also home to 105 small towns and villages. The region's mix of public and private land allows for conservation and civilization to thrive.

Colvin got his start at his father's law office in Albany, specializing in real estate law and gaining practical surveying experience. Colvin spent several years around the 1860s exploring in the Adirondacks and by 1869, he decided to do a geological survey of the region.

One year later, Colvin recorded his ascent of Seward Mountain - where he witnessed the widespread devastation of the logging industry - and presented his observations to the Albany Institute. This caught the ears of several NYS officials and was printed in the annual report of the New York State Museum of Natural History. In his report, Colvin argued that clear-cutting would lead to reduced water flow in the state's canals and rivers - main thoroughfares of commerce for New York City and beyond.

In 1872, Colvin applied for a stipend from New York State to cover the costs of a survey, and was presented with a budget of $1,000, and named to the newly created post of Superintendent of the Adirondack Survey. Over the next year, Colvin and his crews discovered Lake Tear of the Clouds - the source of the Hudson River, and many more Adirondack peaks. Through his work in the Adirondacks, Colvin was able to demonstrate the need for conservation of the state's wild spaces. Eventually, Colvin was appointed Superintendent of the New York State Land Survey, where his work led to the creation of the Adirondack Park Forest Preserve. 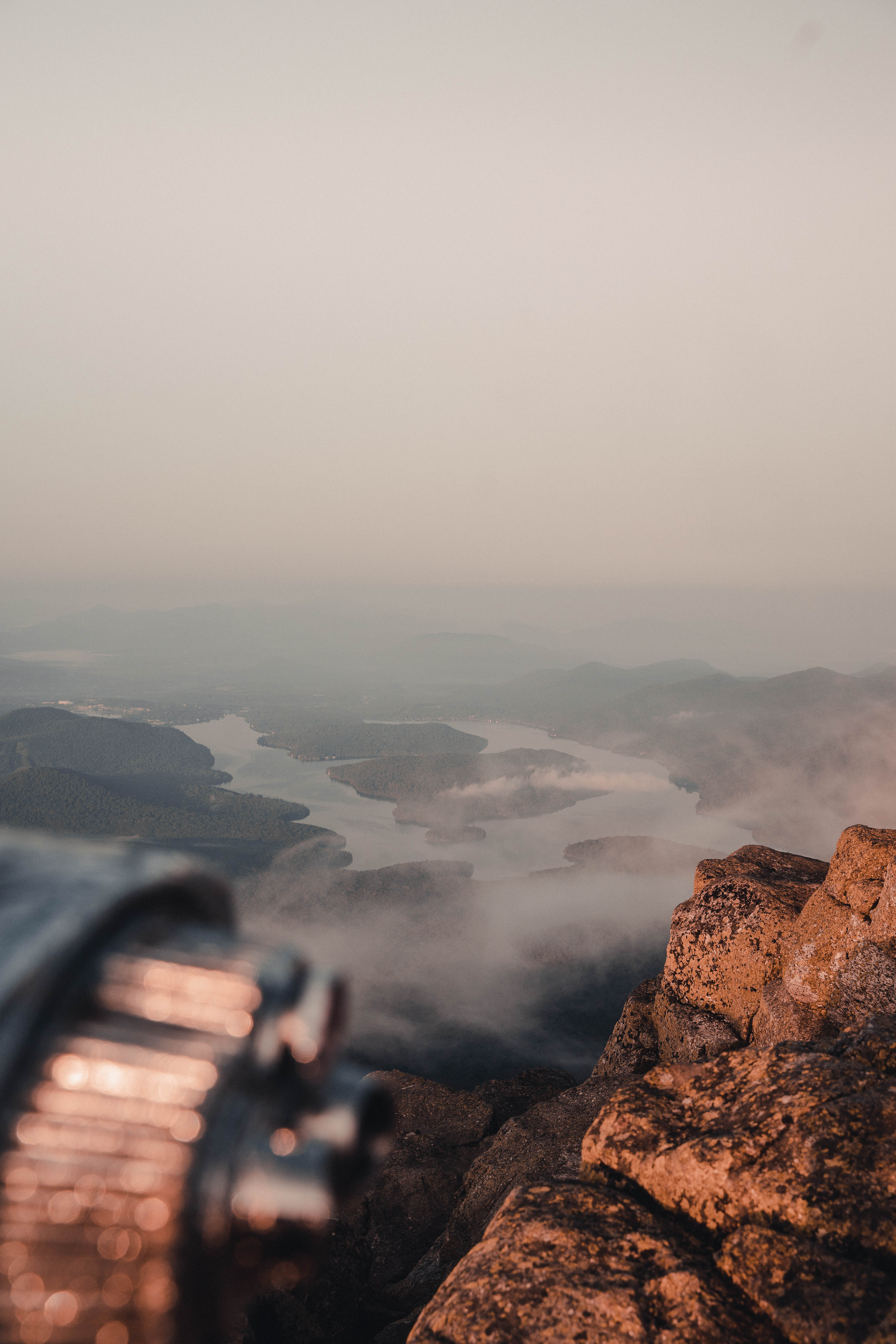 Is the Adirondack Park a National Park?

A large portion of the Adirondack Park is made up of Forest Preserve, which comes with its own land-use codes and regulations. Most of New York State's entire Forest Preserve is located in the Adirondacks, and there are 286,000 acres of New York state-owned land in the Catskill Forest Preserve. These are the only two areas in the state that are designated as "Forever Wild" – meaning the land is protected under Article XIV of the New York State Constitution – " to preserve the exceptional scenic, recreational and ecological value." (Source: http://www.dec.ny.gov/lands/4960.html)

This amendment to the state constitution ensures that forest preserve lands won't be logged for timber, and certain areas will be maintained according to unit management plans for recreation, including skiing, hunting, fishing, hiking, camping, and mountain biking. 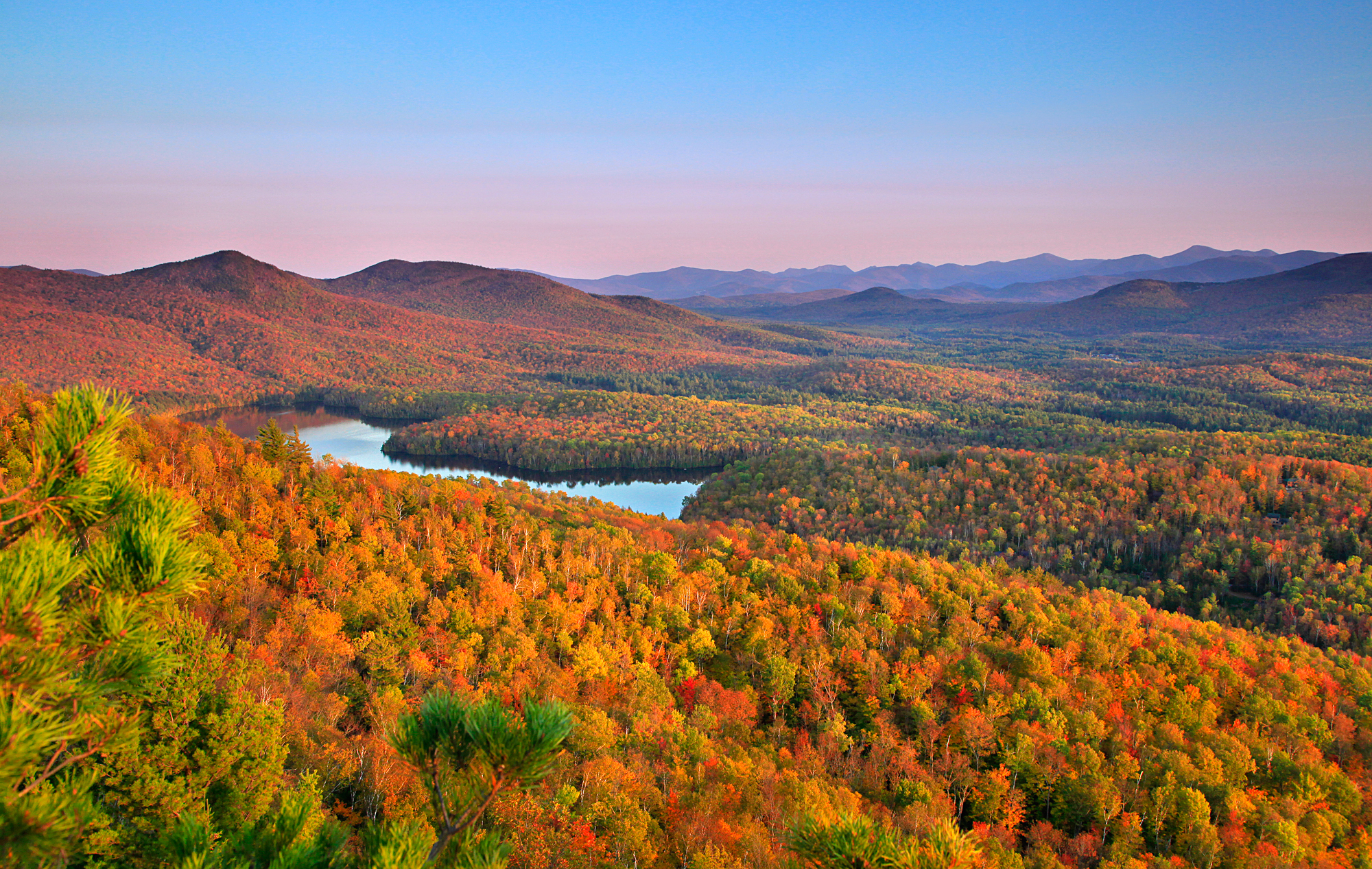 Larger than several states in New England, the Adirondack Park contains the most expansive protected wilderness area east of the Mississippi.

The boundary of the park encompasses more than six million acres, nearly half of which belongs to all the people of New York state and is constitutionally protected as a "forever wild" forest preserve. The remaining half of the park is private land including settlements, farms, timberlands, businesses, homes and camps.

The Adirondack Park boasts 3,000 lakes and ponds, and 30,000 miles of rivers and streams, therefore Adirondack waterways are vast, wild and primal -perfect for New York canoeing and kayaking. The 46 tallest mountains within the park are called the Adirondack High Peaks. Mount Marcy is the highest point in the entire state of New York, towering 5,343 feet above the High Peaks Wilderness Area. Whether you're a "46er" or simply looking to take a nature walk in the lower elevations - the Adirondack Park has more than 2,000 miles of complex and beautiful New York hiking trails that cater to every skill level. Year-round recreation at alpine and cross-country ski centers is also a popular draw throughout the region.

Handicap accessible trails are offered in many regions so that everyone can enjoy the wilderness. For a hands-on glimpse into the history of the Adirondacks - from the logging industry to the distinctive architecture of the Adirondack Great Camps - The Adirondack Experience - The Museum at Blue Mountain Lake is the best place to go. The Wild Center Natural History Museum in Tupper Lake focuses on the environment and geology of the park. Celebrated for their experiential exhibits, these two museums are a must for first time visitors. 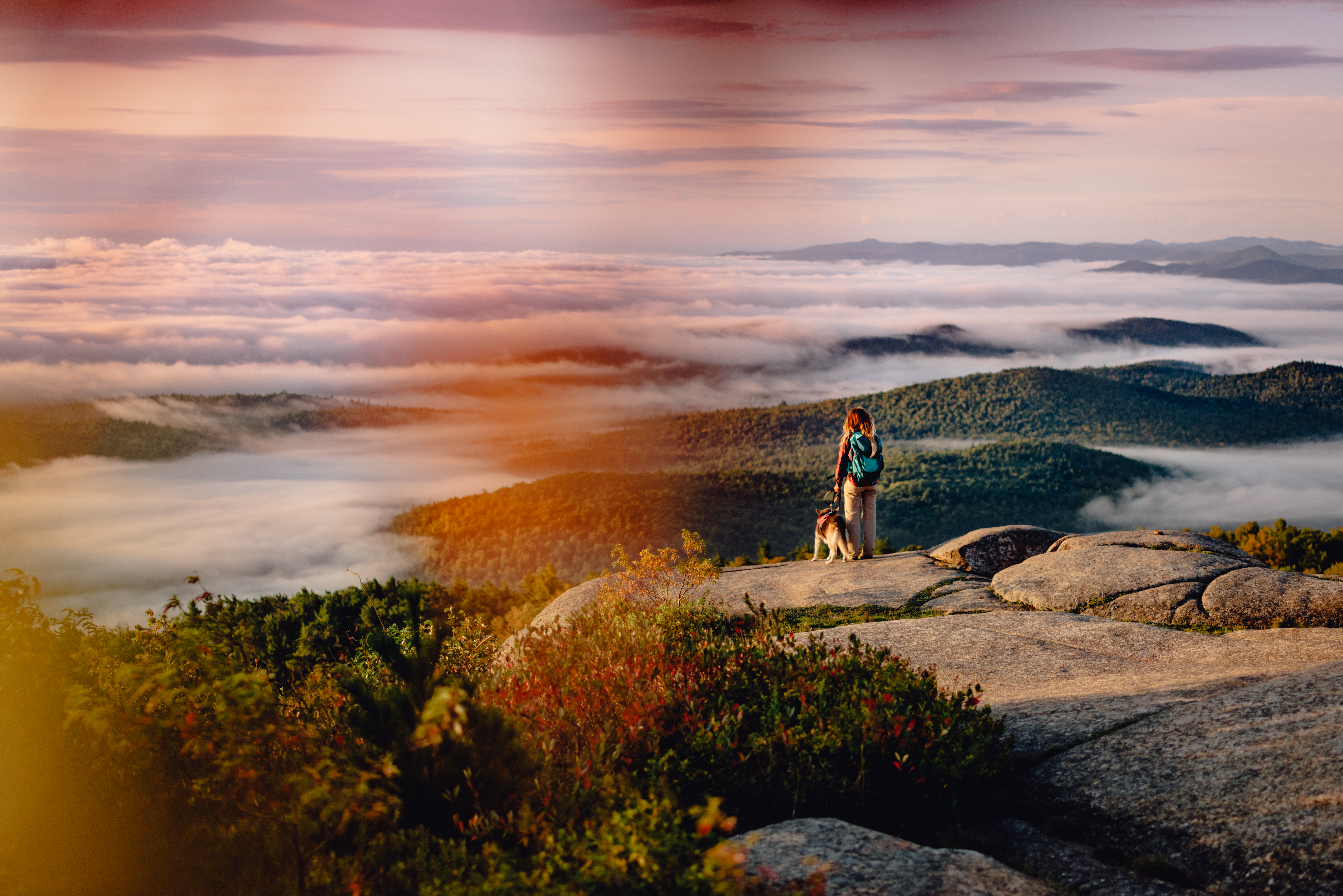 When the first maps of the Adirondack Park in Northern New York were made by cartographers, blue ink was used to delineate the park's boundaries - a choice that has led many to refer to the Adirondack Park as being within the "blue line." Originally, the blue line was meant to guide the acquisition of future State Forest Preserve lands, but over the centuries, it has come to define the region - often resulting in legal impact on the public and private lands located within it.

The New York State Constitution necessitates that any land owned or acquired by the state within the blue line be kept "Forever Wild." Unless a special amendment is made for a development project, state Forest Preserve lands cannot be bought, sold or transferred - allowing Adirondack recreation opportunities to flourish.

Although it is known for offering incredible outdoor recreation experiences, the park offers an authentic and unique wilderness adventure within a day's drive for 60 million people. It's just hours from New York City, Boston, Burlington, Montreal, and Ottawa. Discover the enduring legacy of this wild area during your next family vacation. 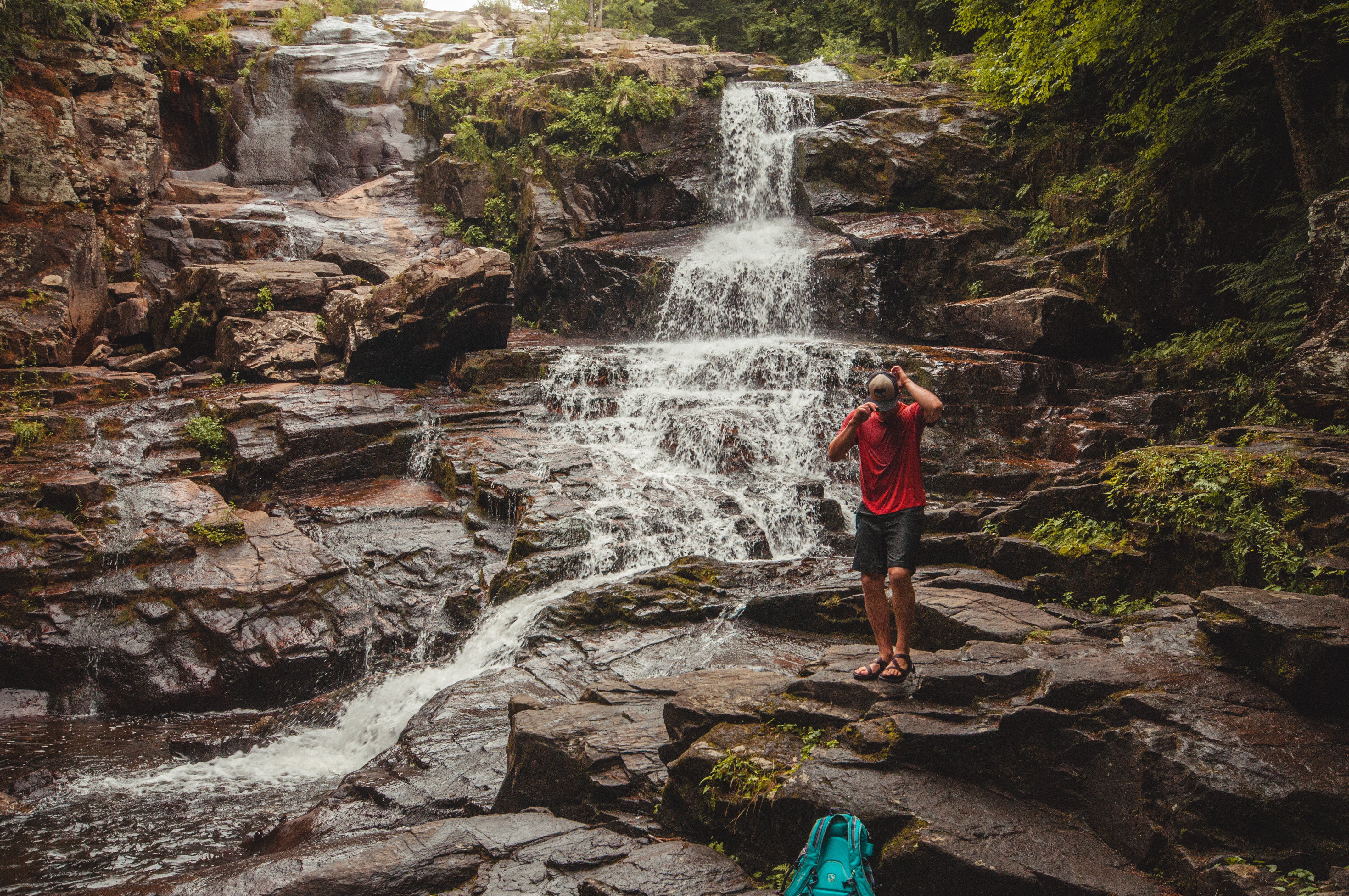 Old-growth and second-generation forests are home to a multitude of Adirondack animals and birds. There are over 50 species of mammals that live in the Adirondack Mountains and parks of New York.

Mammals in the Adirondacks

Below is a small sample of some of the interesting mammal species you might run into during your visit to the Adirondack woods, mountains, creeks, or lakes: 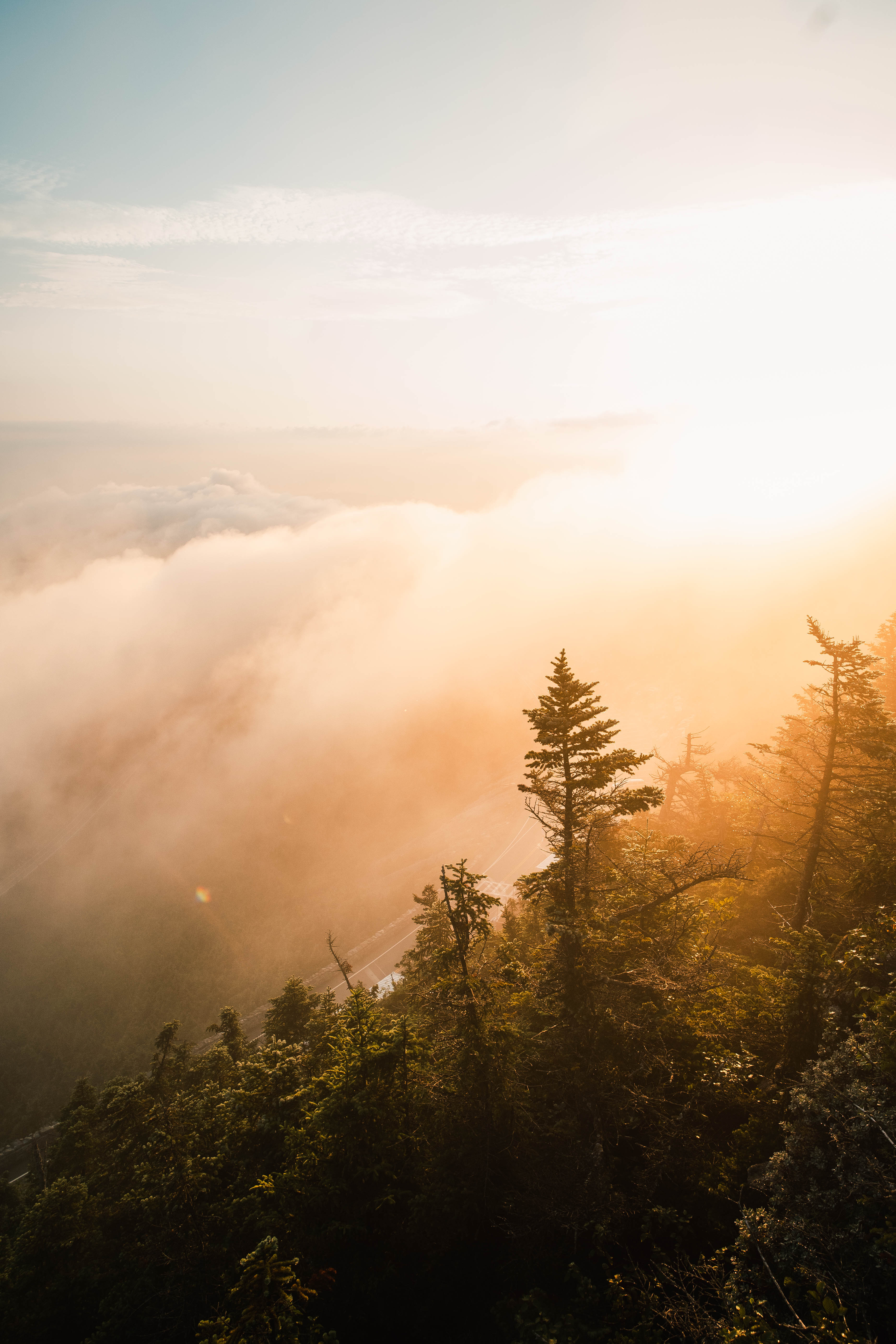 The Adirondack Mountains make up the southern part of the Eastern forest- boreal transition eco-region - a temperate forest region that extends into Maine and eastern Canada. The vast Adirondack Park Forest Preserve is home to spruce, hemlock, beech, and pine, as well as broad-leafed trees. In fall, visitors from around the world enjoy the spectacular fall foliage - a top attraction for leaf peepers.

In Spring and Summer, alpine meadows, fields and forests burst into bloom. Wildflowers as well as moss and lichens such as deer's hair thrive in the mountains and valleys. On any given Adirondack hiking trip, find Alpine Bilberry, Lapland Rosebay, and Bearberry Willow and Mountain Sandwort. Two varieties of shrubs are native to the Adirondacks: yew and juniper. Several Adirondack plant species are edible. Any nature trek in the spring will yield fiddlehead ferns - a seasonal plant that is culled for culinary recipes, and partridge berry, which is used to make jam.

The Adirondacks are part of the largest boreal forest in the world. The word 'Adirondack' is thought to be a derogatory term given to the Algonquin tribe by neighboring Mohawk, meaning "barkeaters." Often misspelled as Adirondak or Adriondack, a geologist, Ebenezer Emmons, named the region we know as the Adirondack Park in 1838. The park was first deemed Forever Wild in 1885 when New York State established the Forest Preserve, yet timber cutting was still allowed. To counteract clear cutting of the wild forests, and pollution of rivers and streams, New York State declared the Adirondack Park truly Forever Wild in 1894, prohibiting the sale of state land and the timber thereon. Often delineated by a blue line on maps, the Adirondack Park's 6 million acres of private and state-owned land is easily found on any map of New York State. 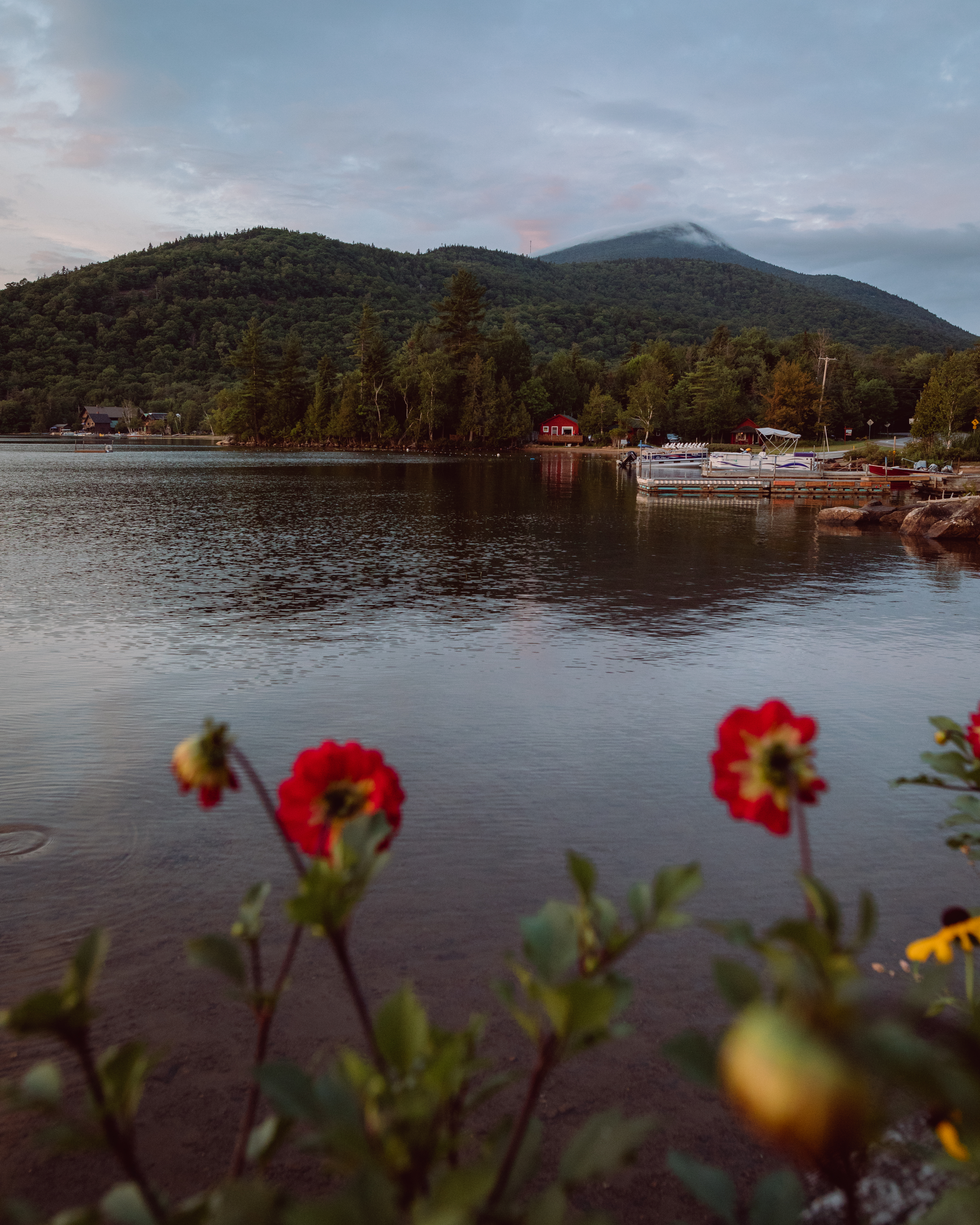