Early 19th century architects created function from form, taking design cues from nature to establish one of the most recognizable architectural styles of the era – Adirondack Rustic. Expansive lodging compounds, referred to as Great Camps, were designed to blend into their natural surroundings, offering rustic yet luxurious retreats for the Gilded Age elite.

Adirondack Great Camps were as synonymous with the Gilded Age as the names Vanderbilt and Rockefeller. Designed to blend into their natural surroundings, these sprawling compounds spanned the most coveted shorelines of the Adirondacks – as well as some of the most remote. From Raquette Lake to Upper Saranac Lake – Camps could take weeks to get to; and so the glittering elite of the early 19th century made the trek in early summer for a season of relaxation amid towering fir trees and sparkling, endless lakes.

The Father of the Adirondack Great Camp

Known for being the father of the Adirondack Great Camp, William West Durant was born the son of a railroad baron with an eye toward expanding his prospects into the Adirondacks. Durant's father tasked him with designing a retreat for entertaining wealthy investors and property developers. Around the same time, W.H.H. Murray's "Adventures in the Wilderness" was published, inspiring renewed interest in the natural world. Murray's tales spurred tourism to the Adirondacks – creating a perfect storm of conditions for Durant to pursue his burgeoning new architectural style. Durant seized the opportunity and began to design massive compounds out of native materials that gave root to the Adirondack style.

Built over a thirteen-year period beginning in 1877 on the shores of Raquette Lake, Camp Pine Knot was the original Adirondack Great Camp and has since epitomized the Great Camp architectural style we know today. Durant designed Camp Pine Knot into a compound cluster of buildings that allowed privacy to coexist with a sense of community. After a long stretch of living lavishly and spending frivolously on the building of Great Camps, William West Durant sold Great Camp Pine Knot to wealthy railroad industrialist Collis P. Huntington in 1895. Huntington passed a few years later, and the camp remained empty for nearly 50 years until his heirs gifted the estate to SUNY Cortland in 1949. Cortland has since renamed the compound Huntington Memorial Outdoor Education Center and hosts school groups year-round.

Built for his own use and began in 1890, Great Camp Uncas, nestled on the shore of Lake Mohegan, was the second of Durant's Adirondack Great Camps. The camp was composed mainly of resources gathered and forged on-site and was completed in two years. Great Camp Uncas was sold to J. Pierpont Morgan in 1896, who enjoyed it until his passing in 1913. From thereon, the camp remained with the Morgan family until Margaret Emerson, the widow of Alfred Gwynne Vanderbilt, bought the estate in 1947. Mrs. Vanderbilt left Great Camp Uncas to a foundation, which eventually sold it to the Rockland County Boy Scouts. Great Camp Uncas was returned to private use in 1975, and thereafter was listed on the National Register of Historic Places in 1987, and was designated a National Historic Landmark in 2008.

Daunting debt did not deter Durant from spearheading the building of his third Adirondack Great Camp, which was destined to be the most expansive and expensive yet. Built over the course of 1895-1897, Great Camp Sagamore was built on the shores of Shedd Lake which sits to the south of Raquette Lake, where Camp Pine Knot and the Adirondack Great Camp style first took root. Great Camp Sagamore was brought to life using the same compound design as Durant's previous two Great Camps. In 1901, Durant fell to more financial hardship as he underwent a lawsuit brought on by his sister over the mismanagement of their family's estate. Great Camp Sagamore was sold to Alfred Gwynne Vanderbilt, who renamed Shedd Lake to Sagamore Lake, and improved the compound to include running water, flush toilets, a sewage system, hydroelectric plant, and an outdoor bowling alley. In 1915, Alfred died as a victim of the Lusitania sinking, leaving Great Camp Sagamore to his widow, Margaret. Margaret used the camp seasonally for years before transferring it to Syracuse University, which operated a conference center on-site. A portion of Camp Sagamore was included on the 1976 National Register of Historic Places, and the camp as a whole was designated a National Historic Landmark in 2000. Currently, the camp is run by the Sagamore Institute of the Adirondacks, which offers accommodations, educational programming, and public guided tours seasonally. 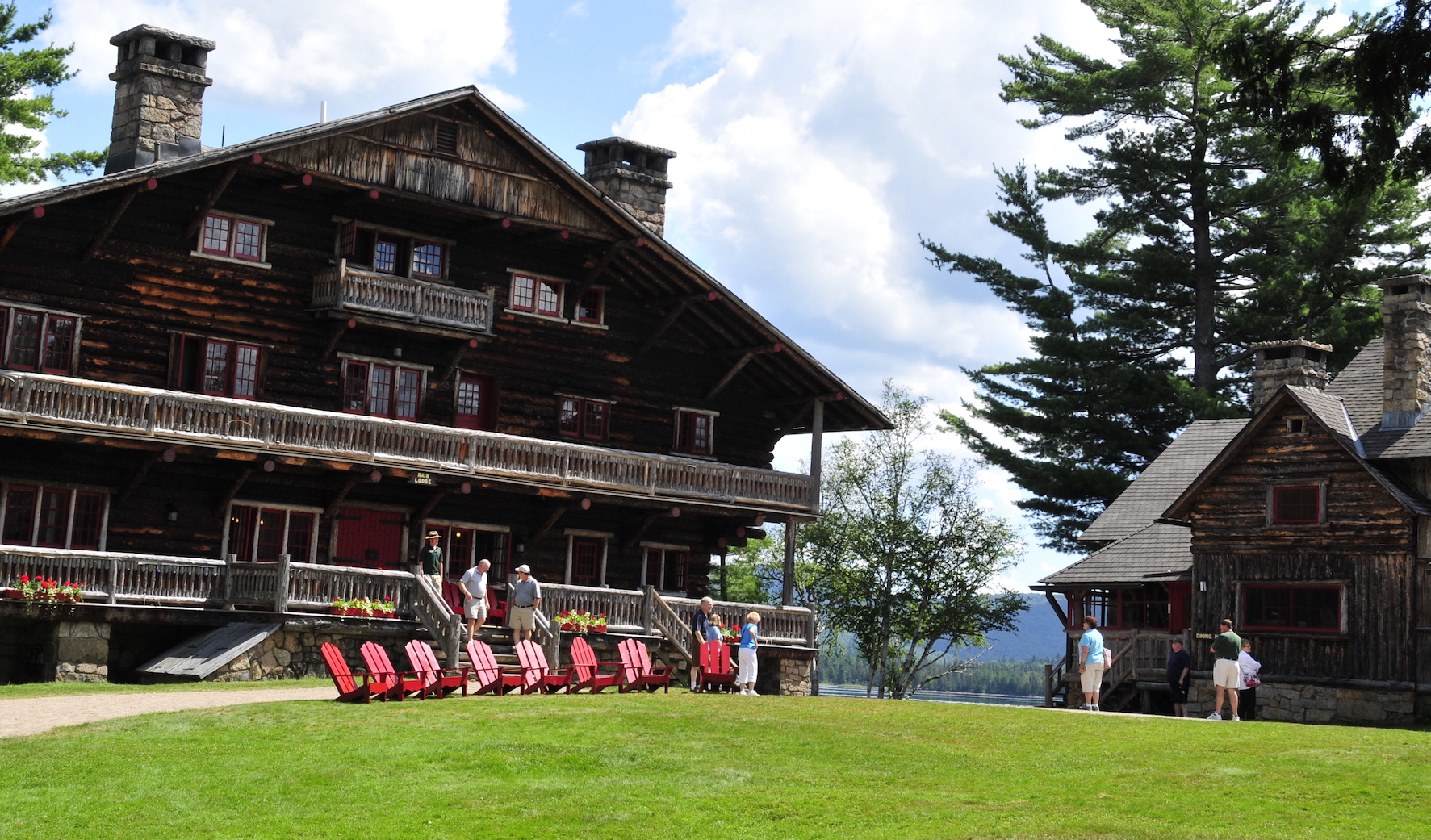 Today, many Adirondack Great Camps remain in the hands of private individuals, though the exclusivity surrounding most has vanished with the golden sheen of those pre-Depression years. There are a few exceptions to that rule, however! Many Great Camps offer professional or self-guided tours of the properties throughout the year.

The sprawling compound and National Historic Landmark known as Camp Santanoni is a must-see attraction for the adventurous traveler. Once one of the most sophisticated and treasured Great Camps of its era, this secluded complex provides a 9.5-mile wilderness mountain biking or hiking experience will lead you to one of the great treasures of the Adirondack Region. Open seasonally, Santanoni offers guided tours, residential programs, workshops, programs and lectures throughout the summer.

In Paul Smiths, White Pine Camp boasts its own storied elegance and historical importance as the one-time summer White House of President Calvin Coolidge. Built at the turn of the 20th century, White Pine Camp features the classic Great Camp style of multiple buildings that form the compound. Open year-round for overnight guests, White Pine boasts an indoor tennis court, bowling alley, and two boathouses, as well as the iconic Japanese Tea House extending into Osgood Pond on its own peninsula.

Once the summer retreat of Alfred Gwynne Vanderbilt and his wife Margaret, Great Camp Sagamore is open Memorial Day through Labor Day, and guests can enjoy the camp's many treasures, including an indoor bowling alley, paddling and fishing on pristine Sagamore Lake, artisan workshops and special weekend events. 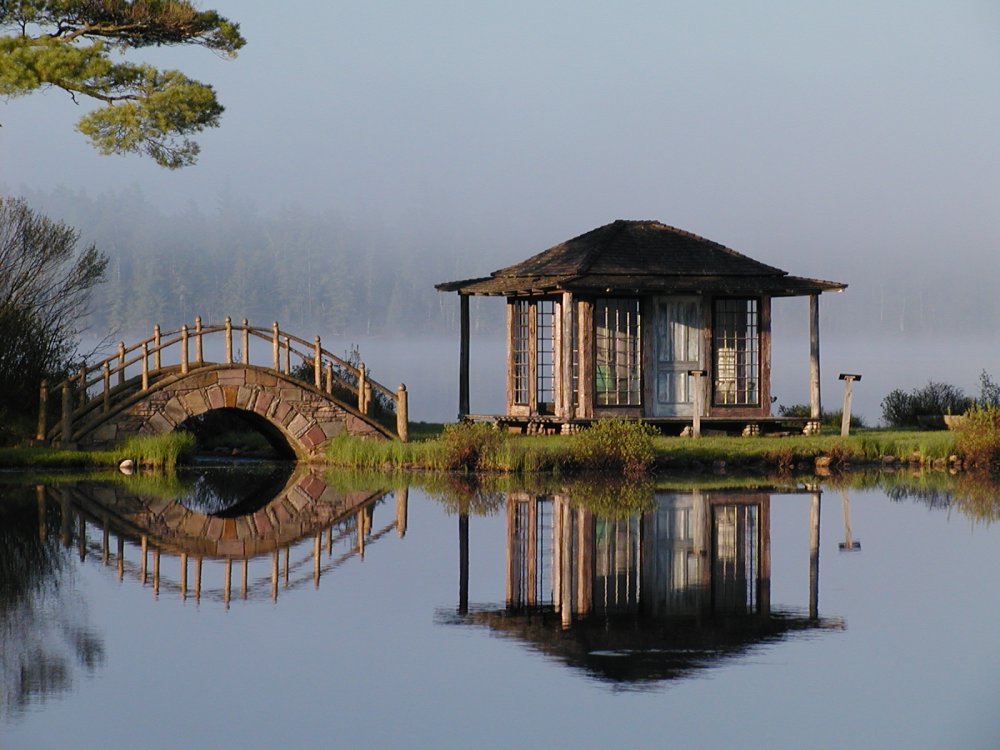 Adirondack Architectural Heritage (AARCH) oversees the preservation of many Great Camps and other rustic buildings throughout the Adirondack Park. As a non-profit, AARCH acts as a steward for the region's architectural treasures, leading group tours and hosting exhibits and workshops to further understanding and conservation of the region's unique history.